According to a recent report, two motorcycle riders were involved in an accident that resulted in death for one, injuries for another and injuries for a driver who apparently pulled out in front of them.

Mark Glorioso, 46, of Carmichael died at the scene of the crash near Miles Lane in Carmichael. He was killed when he struck the driver’s side door of a car driven by Mary Berkowitz as she merged in front of Glorioso and Ryan Combs, 37, of Orangevale, who was also riding his motorcycle with his friend.

Both men tried to brake when 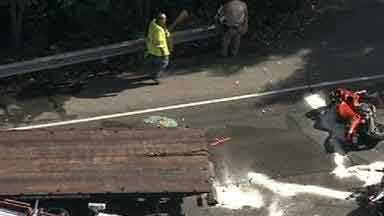 they realized the car was in their path but were unable to stop in time. Combs was able to voluntarily eject from his bike before impact and skidded across the road, suffering moderate to major injuries. Berkowitz also suffered major injuries. Both riders were wearing helmets at the time of the crash. Traffic was tied up for several hours after the accident in both directions on the road.

The statistics related to motorcycle accidents show that riders are at greater risk of injury or death than passengers or drivers of other vehicles. The Centers For Disease Control reports that there were more than 34,000 deaths and 1.2 million injuries associated with motorcycles in the years between 2001 and 2008. The largest age group affected by motorcycle accidents was 20 to 24-year-olds, followed by 25 to 29-year-olds. However, older age groups are seeing significant increases in injury rates as the average age of motorcycle riders increases.

Death rates from motorcycle accidents have been on the rise for the past few years. Between 2001 and 2008, the death rate for all age groups increased by 55 percent.

More than half of all nonfatal injuries from motorcycle accidents are head and neck or leg and foot injuries. Non-fatal injuries increased by more than 50,000 per year between the years 2001 and 2008.

Victims of Motorcycle Accidents Have Rights

Many people try to blame motorcycle accident victims for their own injuries. In fact, many motorcycle accident victims are truly victims of another driver’s negligence. If you have suffered injuries in a motorcycle crash, it is very important for you to attempt to recover damages to pay for your expenses such as medical bills and lost wages. Otherwise, you risk having an insurance company deny your right to compensation.

Ashley Injury Lawyers in Roseville is ready to help. Contact us today about your motorcycle accident injury case. When Should I Call a Lawyer?